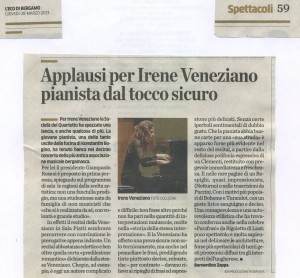 The association called Società del Quartetto has broken a lance, and even something more, in favour of Irene Veneziano. The young pianist, one of the many musicians come out of the Konstantin Bogino’s source, held the bank in the 10th concert of the oldest Bergamask musical circle.

The chairman, Mr Giampaolo Rosa, proposed himself, explaining on the programme of the concert the reasons for their artistic choice: not an infant prodigy, but a student coming of a non-musicians family “who has realized herself with will-power and hard study”.

Actually, Veneziano’s recital in Sala Piatti seemed quite to run along these properties. A rather eclectic recital, well on that certain “romantic preference” declared by Veneziano herself. Chopin, for example, is now a complex and difficult composer, at least because he has no equals in quantity of great performances, many of which are in the “history of the interpretation”. And Veneziano gave us a secure result: not only technically, but also into painting phrases, having a preference for rather marked and strong colours, which – in contrast – gave relief to the phrase closes and more delicate expressions. Without any mawkish exaggeration. The pianist has good chances for her “own way” and this appeared clearer in the other excerpts of the recital, beginning from charming and expressive polyphony of a Clementi, performed with valuable immediacy and purity of style. And in the precious pages of a Respighi, quasi-impressionist (Notturno) or in the Puccini transcriptions. With the most popular arias from Bohème and Turandot, with a sanguine and marked lyrical gesture.

A consciousness and a stylistic authority wich was confirmed in the famous “Parafrasi” from Rigoletto by Liszt: not much exhibition and a lot of wisdom into tracing the outline for the architectures, maybe more spectacular than many pyrotechnical gestures, so frequent among the Hungarian author performers.